September 9, 2018    by  Morgan Xin
On September 8, 2018. The 2018 Founder World Blockchain Impact was held at San Francisco. From the first round to the final, a team from Asia---Seal----won the second place among 1000 blockchain startup projects.

Marvin Zhang, the founder of Seal, had been working for Wall Street firms for over 10 years. He was a former employee of Lehman Brothers and UBS.

10 years ago, also in the September, Lehman Brothers collapsed, filing for bankruptcy with $639 billion assets and $619 billion in debt. It was the largest bankruptcy in history. The whole U.S. sank into subprime crisis head over heels.

10 years later, in this September, Marvin and his team demonstrated their transformative innovation: the world first finance public chain providing top level security and specially designed for Blockchain assets circulation. They focus on financial transaction using a build-in “gold standard” stable coin. We use gold as collateral and its face value is packed with US dollar. As Marvin said, all his  efforts is to prevent such disastrous financial crisis  from happening again in the future.

​(For the Chinese version of the interview, please click here)
​​ 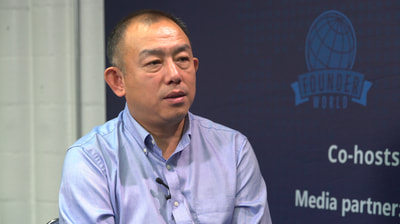 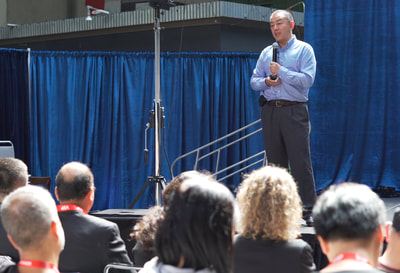 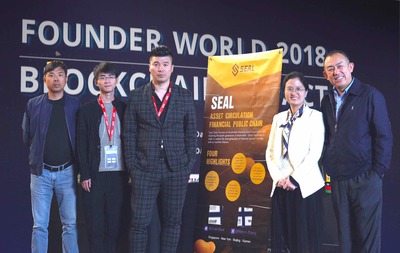 Zhang: I feel very excited and really appreciate our organizers and our team effort. Our effort was recognized by the world. We feel very encouraged. We do believe that Seal is an excellent project and we are a fabulous team.

Xin: Could you please tell us what is Seal?

Zhang: Sure, we all know the blockchain has a Trilemma, which consists of scalability, security and decentralization. General public chain compromises on security to achieve efficiency. Seal
is a finance public chain providing top level security and specially designed for Blockchain assets circulation.

We do focus on financial transaction using a build-in “gold standard” stable coin. We use gold as collateral and its face value is packed with US dollar. Our stable coin is issued not just to speculate on crypto prices, but to facilitate real financial asset transactions, buying and selling loans, debts, and ABS assets. Anybody who has gold can contribute gold into the system and become part of the stable coin and enjoy the fees generated from the stable coin.

Xin:  Could you please briefly introduce the history of Seal?

Zhang: Sure, I personally got involved in Bitcoin at the end of 2013. Last year we found a company S-Labs (www.s-labs.cn) in China. S-Labs is a blockchain company provide ABS services and blockchain finance in China. We have done pretty well.

Seal was initiated in May 2018. It was registered in Singapore and headquartered at Beijing and Xiamen in China. We just finished our angel round financing last month, and we plan to do another round private placement next month.

The name of Seal comes from two words: securities allocation. We are a finance public chain. Of course, Seal is also a name of an animal. I was told it was famous right here in San Francisco.

Zhang: ​First application is that in May this year, we deployed world’s first Blockchain ABS asset management system for Tebon Securities. Tebon Securities is the largest ABS platform in China.

The second one is a P2P platform Score One, which was singapore and became No.1 P2P platform in Vietnam. Its current customer base is close to one million. We are working with partners in Indonesia, Philippines, and other southeastern Asian markets, ​estimated customer base of 10 million in 2019.

The third one is Titan Cloud. Titan Cloud is a leading SaaS provider in the travel industry in China, We  connect the upstream and downstream supply chain resources of the global tourism industry. Right now we have over 6000 customers.

Additionally, we can provide infrastructure to many other scenarios, such as insurance, investment advisory, if combined with AI, corporate debt, stocks, etc.

Xin: What motivates you to initiate Seal?

Xin: How practical is your solution?

Zhang: Right now, our business already have customers. Customers have already used our technology, and the feedbacks are pretty good. So we already have the first step.

Get back to the crisis, basically the subprime crisis happened because information was monopolized by the financial institutions. So the general investors do not have correct information about what stock they have invested in. Blockchain can make the information more transparent, not centralized by banks and Wall Street bankers. So, the investors can have real authentic data, and know clearly what product they invest. Blockchain can solve that problem, we already have the first step. I am really confident on that.

Xin: Could you please tell me the external and internal factors that help you realize your goal?

Zhang: External factors, number one is the government. We live in a physical world and we have to abide by all the government laws and regulations, and different government have different laws about cryptocurrencies. So, that’s the most important factor.

Another external factor is general public’s acceptance about blockchain. Right now that part is quite small, only one percent of the world population actually understand blockchain and believe in blockchain. So, the industry as a whole still have long road to go.

Internally, I think, for me, just to find the right people and build up a team that has good execution and capabilities. Step by step, we move forward.

Xin: Could you please introduce the collaboration with Southeast Asia market?

Zhang: Right now, we are doing P2P market basically in Southeast Asia. There are a lot of P2P platforms. Most of them are from China, so communication is not an issue. They are providing loans to individual borrowers. The P2P market is very big and grows very fast. Southeast Asians do have issue about the financing, they don’t have money to actually loan out.  Once they loan out, the retention is pretty high. So, using blockchain, using our stable coin we are actually solving that issue.

The reason why they don’t have money is because investors do not trust them. Say, I am an investor in the United State, I have one million US dollars, I cannot just give the one million dollar to a company in Vietnam or Indonesia, I don’t know them. Right? So, how blockchain solve that problems? If you log on our Seal chain ecosystem, you purchase stable coin using fiat. You have one million dollar, you can get one million stable coin, then just transfer the stable coin directly to borrower’s individual wallet in that country. The duration is normally short, like one week or two weeks, less than one month. Once the borrowers have the money to return, they just buy the stable coin and transfer it back. Through this way, you can direct invest and enjoy the higher return from the developing countries. That’s what we are doing. I am really excited actually.

Xin: Why do you call Seal an ecosystem?

Zhang: Seal internally is a circulation system. To the general public, Seal is an ecosystem. Ecosystem means it’s not just a company. We have a company and we have all the other external partners, all the other applications, and investors. So companies with asset and money, we together form this ecosystem.

Xin: What are the Seal’s advantages in Southeast Asia?

Zhang: We have three advantages:

These are three factors we think distinguish us from other players.

Zhang: In short term, we just need to nail down the P2P market in Southeast Asia. It’s the objective of this year. Next year, at the technology front, we have to put in more resources and upgrade it to have better security and better efficiency. In long term, we hope that people are actually joining our ecosystem voluntarily, not by invited. The day people are actually doing that without Seal knowing is the day that we succeed.

First is to access to the engineer community, so that they can join our effort to build a better Seal system.

Second, as a startup company, we are always in need of capital funding. We are trying to talk to the VC funds and token funds right here to see if we can broaden our range of investors.

Xin: What do you want to say to your investors and potential investors?

Zhang: Everybody knows that blockchain is the next big thing, but pretty much nobody actually sees it yet. Seal is a blockchain project that is actually running and our token is actually being used right now as we speak. So this is a real project. It is not a story, it’s not the hypothesis. We do believe Seal can bring tremendous financial return for investors.

Xin: What do you want to say to your collaborators?

Zhang: As a blockchain and a public chain, we always need more collaborators, we always need more partners. We encourage your guys to understand Seal, to get to know about us, to see if Seal can actually really solve your problem. We do have faith on that. Welcome participate.

As long as you are doing financial asset transactions and you are troubled about the financing issue, most financing problems come from trust because investors don’t trust you, that’s why you don’t have enough funding. If you are troubled with those kind of issues, Seal is your perfect solution.

Zhang: For broader blockchain community, right now, although the market is kind of bearish, still we are joining a much better time than 2 or 3 years ago. When I first started, blockchain and the cryptocurrencies are kind of like the Ponzi scheme, like a bunch of crazy people doing crazy things. At least right now, the mainstream society have already recognized blockchain is the next thing, we are just trying to find who is the big one, I think we are much better than before. I do believe Blockchain is the biggest thing in the next few decades. So, if you are young, energetic, and smart, please join us.

Last but not least, We do think that between China and America, we need a lot of communications. I think, you obviously came from China, you can build a very good bridge between two nations. It’s very valuable. It can bring a lot of values for both Chinese companies and American companies. That’s something I think we need to both work on.